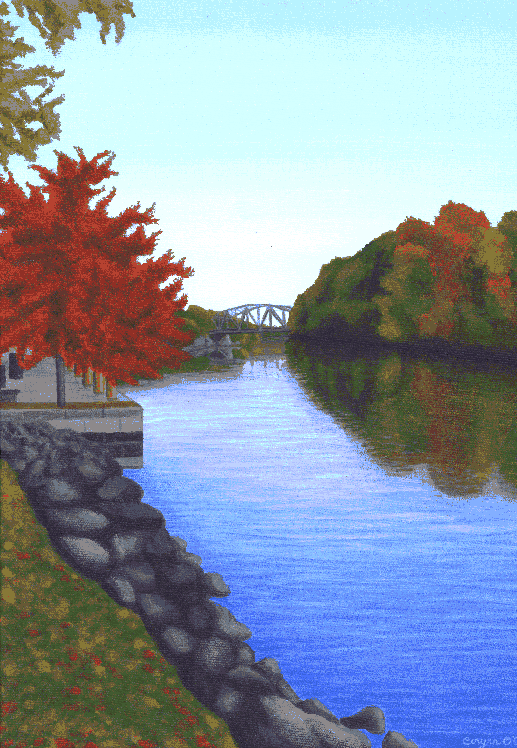 The Erie Canal is the cross-state route of the New York Canal System. Formerly known as the New York State Barge Canal, it was the nation’s first major transportation system and was built in order to find a more cost-effective way to ship bulk goods. It was considered one of the most extraordinary engineering feats of the 19th century.

Construction began in 1817 in Rome, New York. Thousands of immigrants had to dig with shovels and horse power and were paid between 80 cents and one dollar per day for their work.

The canal opened on October 26, 1825. It cost $7 million dollars to build, but reduced shipping costs significantly. There were no steamships or railroads at the time and the cost to ship one ton of goods from Buffalo to New York City was $100. After the canal was built, that same ton of goods could now be shipped for only $10!

Not only did the Erie Canal reduce shipping costs, goods could now be shipped much faster. Freight could travel about 55 miles, while passengers could travel at a rate of 100 miles in one 24 hour period.

For thousands of people, the Erie Canal became their livelihood. Their canal boats became floating houses as they traveled from one town to another, with their children leading the mules that drove the boats at a steady pace. Some would travel the canal in passenger vessels to enjoy gambling and other entertainment. The canal was a bustling place to be.

Growing competition from railroads and highways saw commercial traffic on the Erie Canal decline dramatically in the latter part of the 20th century. The opening of the St. Lawrence Seaway in 1959 further added to this decline. However, there is still plenty to enjoy on the Erie Canal. Today, you can find pleasure boats, fishermen, cyclists, and hikers all along the canal route, enjoying the peaceful scenery that the canal has to offer.